Counting Calories in a Starving World

The parable of the sheep and the goats is nobody’s favorite story. There are lots of paintings of the waiting father embracing the Prodigal Son and the Good Samaritan helping the man in the ditch, but there aren’t any pictures of the goats being damned on the walls of children’s Sunday school classes. Growing up, I was in church every Sunday that I didn’t pretend to have a cold, and I don’t remember ever hearing a sermon on this story. If there are hymns on this parable, nobody sings them. In Bible studies, this is one of those passages where the teacher ends up saying, “Okay, we agree that Jesus didn’t mean what he said, but what did he mean?” Most of the time we just skip this part—and with good reason.

Jesus was on the Mount of Olives when he told everyone to take a seat. “This is important. Listen carefully. Judgment Day is coming and there will be surprises. The judge will divide the people like a shepherd separates sheep from goats. 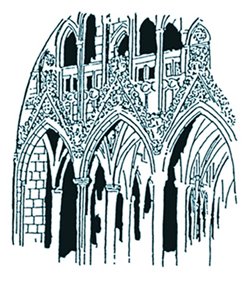 “Then the King will say to those on the right hand, ‘Come and get your reward. When I was a victim of famine, you sent food. When I needed a drinking well, you took up an offering. When I was homeless, you found me a room. When I was shivering, you gave me a coat. When I was in prison, you tried to help. Now it’s time to show my appreciation.’

“Those people will say, ‘We don’t mean to seem ungrateful, but we don’t remember any of that. When did we do those things for you?’

“And the judge will answer, ‘You’ve been doing it all your lives. Every time you helped one of your needy brothers and sisters, you cared for me.’

“Then the King will turn to the goats on the left hand and say, ‘To hell with you. When I was hungry, you kept your money in your wallet. When I had only polluted water to drink, you were worried about your IRA. When I was homeless, you wouldn’t even look me in the eye. When I was cold, you had extra blankets in your closet. When I was in prison you said, ‘Let’s build more prisons.’

“And those people will say, ‘We never did that to you. As for the poor, we don’t know any poor people.’ And the judge will say, ‘You’ve condemned yourselves.’”

This story is disturbing because it’s about how God sees us. Religious people try to boil down the wonderful biblical theme of salvation, wholeness and healing, into a simple formula—four spiritual laws or five steps to be saved. This is as close as Jesus ever comes to summarizing what salvation means, but no one ever puts this on their church’s web site under the heading, “How to Become a Christian.” According to Jesus those who don’t care for the poor have missed the gospel. Regardless of what’s said at eleven o’clock on Sunday morning in most churches, people who neglect the needy aren’t God’s people. How could Jesus have been any clearer?

This story is disturbing, because we are calorie counters in a hungry world. Have you noticed that our meals have been getting bigger? As recently as five years ago, a 10-inch plate was standard in restaurants. Today the standard is 12 inches and one chain is experimenting with a 15-inch model. It wasn’t that long ago that 20 ounces of soda seemed thirst quenching enough. Then in 1976, Seven-Eleven introduced the 32-ounce Big Gulp. They followed that with the 44- ounce Super Big Gulp and the 64-ounce Double Gulp. The human bladder, meanwhile, has a capacity of about 13 ounces. Do the math on that one. America’s obesity rate is three times that of European countries, even though we eat many of the same foods. Americans eat more—even as much of the world starves.

The story of the sheep and the goats is disturbing, because most of us haven’t done much. We try not to think about hunger because the problem seems overwhelming. The statistics are mind-boggling. By one hunger relief organization’s recent estimate, 24,000 people die each day of hunger-related diseases. That’s 1,000 an hour, 17 each minute.

The statistics are so overpowering that the victims become statistics. It’s easy to forget that hunger is suffered one missed meal at a time, one person at a time.

The numbers are sobering, but the faces are far worse. The faces of hunger are the faces of children. Three quarters of those who starve are under the age of 12. Hungry children have eyes that are dulled by insufficient protein. The lack of nutrition means that their mental development is permanently impaired. Many will never be able to think for themselves. Their stomachs are bloated. Their arms and legs are spindly. Their hair is thin. They have no energy. And every one of them has a name—a six-year-old named John, a nine-year-old named Angela.

The resident of a slum in Brazil, Iracema da Silva, said, “Sometimes I think, if I die, I won’t have to see my children suffering as they are. So often I see them crying, hungry, and there I am, without a cent to buy them bread. I think, God, I can’t face it! I don’t want to look any more.”

The faces of hunger are the faces of mothers. Fathers often walk away from children they can’t feed. Mothers are less likely to leave. These poor, sad, lonely, frightened, frail, sick women suffer not only their own suffering, but also that of their children.

These are the words of a mother in the Philippines, a Mrs. Alarin: “I feel so sad when my children cry at night because they have no food. I’m so worried about the future of my children. I want them to go to school, but how can I afford it? I’m sick most of the time, but I can’t go to the doctor because each visit costs too much and the medicine is extra. What can I do?” Hunger is a hundred million mothers weeping, because they cannot feed their children.

The faces of hunger are old. They are wrinkled, tired, and miserable. Their eyes are sunken. Their sight is dim. Their cheekbones protrude. Their teeth are gone because, in their poverty, they know nothing of dental care. Against all odds, they have managed to grow old; and now they have fallen on such hard times that many hope for some sudden fatal disease that will release them from their misery. It’s hard to see the faces of hunger.

Our lack of concern is embarrassing. We lose sleep over problems at work, difficulties at school, and family troubles, but few of us lose sleep over children starving. We tell ourselves there’s nothing we can do about it, but we know that isn’t true. The problem isn’t a lack of food. If the world’s present food supply were distributed equally, there would be enough for everyone to have more than 3000 calories a day. The major cause of hunger is the apathy of those who have more than they need.

We’re capable of more concern than we let ourselves feel. More than that, we’re capable of the compassion that would lead us to action. Jim Wallis describes the step between concern and compassion in this way: “Being concerned is seeing something awful happening to somebody and feeling, ‘Hey, that’s really too bad.’ Having compassion is seeing the same thing and saying, ‘I just can’t let that happen to my brother, my sister.’”

We can’t solve the problem of world hunger, but we can make a crucial difference. Mother Teresa was asked how she kept from being overwhelmed by the multitudes of needy people. She replied, “I love them one at a time.” You and I can make a difference for one or two or three.

We can give more generously than we have. We can ask whether we care enough for these people we’ll never meet, these children of God, to give up some measure of our own comfort to save their lives. No one following the example of Christ can be content to have too much while others have too little. The rich must live more simply so that the poor can simply live.

A middle-aged couple earns good money and yet chooses to live simply. They go without status symbols and luxuries, so that they can give money to feed the hungry. They live a trimmed-down life. Every month the mother gathers the children around the checkbook.

For each check that she writes to whomever it might be, to whatever cause, she tells them a story: “This is why these people need the money more than we need it.” And so these children actually know where the family money is going and that it isn’t there in the bank account for them to buy a new toy.

The parents themselves choose not to always have new, better, more things. Their children are mature, alive, and joyful. The mother’s check-writing process is Christian education at its best. She’s saying, “This is what love means.”

Our contributions won’t tip the scales of injustice, but we can place our stubborn ounces on the right side of the balance. A Swahili proverb has it, “Drop by drop, the bucket fills.” And our one drop will make a difference—for us, too. It sounds paradoxical, but the more we care for the hurting, the more passionately we’ll love life. Giving is celebrating life at its fullest.

Sometimes it’s hard to tell what God wants. This isn’t one of those times. This is judgment day, because we’re deciding whose side we’re on.

—Brett Younger, a frequent contributor to Sacred Seasons, is a pastor in Fort Worth, Texas. This sermon was printed in the2004 Hunger Emphasis Packet of Sacred Seasons