On the Fourth of July this year, America celebrated a new champion! Not only did he win a championship for us, but he defeated a foreigner in the process. I’m talking about Joey Chestnut, who consumed 66 hotdogs in 12 minutes. The news made every newspaper and every news channel. Word went out not only throughout the United States, but around the world.

And how does it make us look? An icon of gluttony—is that what stands for who we are? We are those who measure success on the basis of how much one can consume in the shortest amount of time. All this, while millions around the world go hungry. 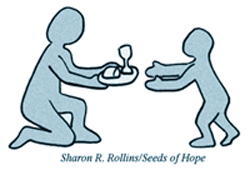 The message was clear to the young lawyer, as Jesus’ message is clear over and over again, that the people who follow Jesus are people who strive to love God—to love God by loving one another and loving other people. In fact, one could say that a great deal of the New Testament is devoted to answering the question which the lawyer asked, “Who is my neighbor?”

Surely, we do live today in a global village; our “neighbors” are near and far. You and I have to be concerned for those who suffer, whether they suffer from hunger, from poor health care, from war, or from despair and fear. It is our concern because they are our neighbors and as the people of God we have responsibility.

The Samaritan did something. How important that is, of all the things we might focus on! That little phrase, ‘Do this! Do this thing!’ Jesus tells the inquirer that the Samaritan “did something.” Most of us Christians today are better talkers than doers.

Today we might try to fill in the word Samaritan. That’s a word that doesn’t have a great deal of meaning to us, except those who have studied this story over and over again in Sunday school, throughout our lives. Today we might say that an Iraqi saw him after two Americans had passed him by—going about their daily business, going to prayer, rushing to a worship service, hurrying on to care about religious matters, passing by someone in need on the side of the road, or perhaps hurrying to get to the next battle.

But the Iraqi stopped to care for him. Perhaps the best contemporary personification would be “Muslim.” The Jews were as shocked that a Samaritan did the “Christian” thing as some of us would be that a Muslim did.

I want us to think this morning about three stories—stories of people who did something. The first is a story told by former President Jimmy Carter. He tells the story of the Ethridge family, Jerome and Joann Ethridge, who lived in his hometown of Plains, Georgia. The Ethridges were farmers, had a simple little farm. Farming was their thing.

They were members of the little Plains Baptist Church where the Carters were members. They heard , as you have heard, through the years—in sermons time and again, in Vacation Bible School, in Bible study—of how we are all called to be missionaries, all called to do something for the Lord. And they decided they would respond to that call.

So the Etheridges—though not a one of them had ever had a foreign language course and spoke English with a Georgian accent—were determined to “do something.” They did a little research and decided there was a need in Togo, French-speaking Togo. And so they studied the French language and went to Togo.

When they arrived, they looked around to see how they might serve God and how they might serve the people there. They found in a close radius to the area where they were working five religious organizations: two Catholic churches and three Muslim mosques. They decided there wasn’t a need for another church at that time or in that place, but there were other needs.

So Jerome wrote back to some friends in North Carolina and persuaded them to purchase for him some well-drilling equipment. This all occurred the same year that Jimmy Carter was elected President of the United States. The equipment arrived, and, in the years that followed, he drilled 130 water wells and built a bridge. In that area there are now 80 Christian churches and 5,000 Christians.

The Ethridges came home to the States last year, simple people, ordinary people doing extraordinary things because they responded and answered the call of God.

Jean Vanier was the son of a Canadian diplomat and an officer in the Royal Army. After he retired, he moved to France, where he took into his home two mentally disabled persons. These two people had been in a local institution called an asylum. We don’t use that word a great deal anymore, but it was an asylum.

Everyone told him he was crazy to take that risk, to bring these kind of people into his home—a risk to him and to his family—but he did it anyway. He declared that the way to get ahead in the world was to go down the social ladder rather than up the social ladder. He discovered the biblical notion that the way to serve God was to serve those people who needed him the most.

He proceeded at that point to establish the L’Arche Community. Perhaps you know about L’Arche. It was the place where the famous Catholic writer, Henri Nouwen, spent his last days ministering. Vanier established that village, and now 130 L’Arche Communities exist in 33 countries and on six continents.

The people at L’Arche live in community. Vanier said everyone needs to live in community. The best times in those communities, he said, are those times of celebration, special occasions, Christmas, birthday parties, all kinds of special occasions, when we get together, and we celebrate life. That is how we celebrate community. And a place of suffering is a place where Jesus is surely to be found.

Scott Neeson was a Hollywood producer. At one time, he was president of Twentieth-Century Fox. Later, he became president of Sony Pictures. In 2003, he took a vacation. The story I read didn’t say why he took this particular vacation, or why he went where he did. It’s not the sort of place most of us would have chosen, but he went to Cambodia to spend his vacation.

It was there in Cambodia as he wandered about that he saw children living in garbage heaps. The only food they got, the only sustenance they had, was whatever they could get out of the garbage dump. Dirty, stinky, uncared-for, unloved, small children, children of all ages suffering in that place. He decided he ought to do something about it.

So he came back home and started the Cambodian Children’s Fund and raised millions of dollars to establish care for the children of Cambodia. That’s a marvelous act in and of itself. Many of us, if we had a lot of money or a little extra money, would love to establish a fund, or to give to a fund, and satisfy ourselves in that way. Thank God for those who make or inherit money and spend it doing something for God.

But Neeson wasn’t satisfied with just raising money. He said the vision really came to him one day when an actor under contract with his studio called him from a distant location and complained because his private jet did not have all of the amenities expected. The actor just didn’t know what to do, felt like he had been neglected, didn’t know whether he should withdraw from the picture, whether he should make the trip or not, because the jet just couldn’t be like this. Soon the agent called and said to Neesen, “Life just isn’t meant to be this difficult.” It was then that Neeson said he realized that his time and effort could be better spent in other places.

So Neeson resigned his job and went to Cambodia to live among those Cambodian children and care for them. The Hollywood critics were everywhere. The papers wrote, “This is just a trick on his part. He’s trying to get out of his contract so he can take a better job, get a better contract with someone else. And as soon as his contract is done with Sony, he’ll be able to sign on with somebody else. He doesn’t really mean it.”

But that has been some time ago, and he’s still there, remains there and says he’s the happiest he’s been in his whole life, caring for those children. Neeson doesn’t claim to be a Christian, but he certainly acts like one.

That ought to embarrass us even more. Here is someone living the Christian way, doing what Jesus would have his followers do, who doesn’t even claim Christian heritage.

Do something. Each and every one of us can be a Samaritan. There is someone that each of us can help along life’s way. There’s someone in our neighborhood that we can help, and there are many all over the world who can benefit in one way or another from our gifts.

Our children learned, in Vacation Bible School this year, that a person can purchase goats through the Heifer Project, work through our local hunger farm, and provide food for people faraway across the globe. It is good for our young people to go to Mississippi, to see young people not living their kind of life, people with needs, people who didn’t have enough to eat.

Our youth noticed that the children in that area often came late to events. They didn’t come for all the Bible teaching. They didn’t even come for all the games. But they came when the food was served because, it was evident, that was the only meal some of them got each day during that week. All they had to eat was the food that was provided through the mission trip of your young people, doing something for Christ.

Do something in service for God. You and I are called to seek those ways, look for those persons, find those places, so that we can use our gifts, whatever those gifts may be, in the service of God. God takes greatest pleasure, not from burnt offerings on an altar, not from our coming in our best clothes every Sunday to church, not even from our appropriate practice of the ordinances. Those things are important. Worship is important. But the greatest worship we do is the service of the people. It’s really what the biblical term from which we get the word worship means: the service of the people.

There are Samaritan hospitals, Samaritan psychological counseling centers, Samaritan food banks, Samaritan stores here and yond, all over the United States and in many other areas of the world. But we all need to know what it really means to be the “Good Samaritan.” We need to know the joy of doing something, giving something, not expecting anything in return. That’s what it means to follow the way of Christ.

Raymond Bailey is the pastor of Seventh & James Baptist Church in Waco, Texas, the church which houses the Seeds of Hope offices. He preached this sermon on July 15, 2007. The three stories he relates, as well as others, can be found in The Life of Meaning: Reflections on Faith, Doubt, and Repairing the World by Bob Abernathy and William Bole (New York, New York: Seven Stories Press, 2007; 420 pp.)