What it Means to Worship

In today’s lesson from the Gospel according to Matthew, Jesus and the disciples find themselves in a bit of trouble for breaking the rules. Actually, the situation was like this: it was the Sabbath, the day that God had declared that the people should rest. And so, according to the Jewish law, no work should be done on that day.

The problem was in deciding what, exactly, defined work. There were many schools of thought on the subject, even among the Pharisees. It would seem, however, that the particular Pharisees who questioned Jesus on this occasion were pretty strict. By plucking grain to eat and healing a man with a withered hand, the disciples and Jesus had, in the eyes of these religious leaders, violated the Sabbath law. 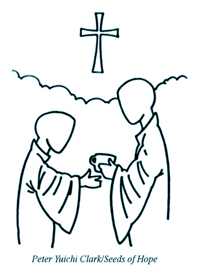 What is interesting is Jesus’ response to their charge. First, we note that he doesn’t do away with the observance of the Sabbath. The day of rest and worship is still to be honored, it’s just that sometimes there are higher priorities. Those priorities, says Jesus, are mercy and human life. It is mercy that God requires, not temple ritual.

Jesus challenged his accusers to rethink the spirit and purpose of the Sabbath rules. The needs of hungry people were to be considered over the letter of the law. If exceptions could be made in order to save a sheep, how much more to bring healing and care to a human being. How much more?

As we gather for worship this morning we know that approximately 20 million people die each year from starvation or hunger-related illness. About 28 people in the last minute.  More starve to death in three days than were killed by the bomb in Hiroshima.

In this country alone, groups like Bread for the World estimate that there are 36 million people who are at risk of hunger, 14 million of those being children under 12. That’s about one child out of every five.  And yet how hard it is for these statistics to move us. They’re just too abstract, too unreal.

Perhaps we should speak of Theresa Simmons, a mother of two young children, pregnant with the third. Theresa’s husband was disabled at work and she cannot earn enough to support her family. Without the meals they receive at the local soup kitchen, her children would go hungry.

Or maybe we should listen to Shanequa Johnson, who says, “This is a scary time. My husband works, but all our money goes to paying rent. I don’t want to leave the kids home alone, so I don’t work. Our neighborhood is just too dangerous. Our food stamps don’t make it to the end of the month, but they help. I try to feed my kids well.”

Perhaps it is only a real encounter with the realities of hunger that wakes us up. Will Campbell shares the following story:

Some of us were conducting a workshop on voter education in Memphis. I had gone to a home in what can only be described as a slum with two of the young people who were doing a survey of registered voters. Two small boys were seated at a vinyl-covered table in the kitchen. They said their mother was not at home. We had the good judgment not to ask about their father. It was mid-afternoon. The scene was one of depressing squalor. One of the boys was eating something I could not identify from a cup. The other one sat across the table from him, making no move to share what his brother was eating. “Why isn’t he eating?” one of the students asked, nodding toward the first boy. He answered matter-of-factly, like he had been trained to say it, and conditioned to believe that was the way thing would always be. “It was his turn yesterday,” he said. It was obvious that his brother understood, and there was not the slightest hint of rancor between them.

Everything, it seems to me. For if we come to worship to praise and honor God, are we not also empowered toward compassion, as was Christ? But if on other days and in other places our lives are not a reflection of this spirit of Christ, then how can we truly worship?

To worship God is not simply to come into a church for one hour on Sunday morning thinking somehow we have fulfilled our obligations of faith. Rather, worship encompasses our gatherings for songs, prayers and sermons, and extends beyond to include all our deeds of mercy and justice.

In fact, I’d venture to say that some of the best services of worship never saw the inside of a church. Don’t misunderstand, this doesn’t mean we don’t belong here. I believe it’s absolutely crucial for Christians to gather as a community of faith, for this is where we come to rest and gather strength. Sometimes, though, we need to be reminded what our worship is all about.

There is a prayer by Janet Nightingale that helps us do just that. She asks God:

When we stand gazing upwards, bring us down to earth with the love of a friend through the songs of the sorrowing in the faces of the hungry. When we look to you for action, demand some work from us: by your touch of fire, your glance of reproof, your fearful longing. As ruler over all, love us into action, fire us with your zeal, enrich us with your grace to make us willing subjects of your rule.

In the letter of 1 John, it is written, “Little children, let us love, not in word or speech, but in truth and action.” In other words, with integrity. Not only must our lives have integrity, but so must our worship. As nice as it is, a gold star for perfect attendance isn’t what matters most.

You’ve probably all heard the saying, “If you’re gonna talk the talk, you’d better walk the walk.”  I think that those who go on hunger walks, work in food pantries, and serve in soup kitchens are doing just that. And in every step they take, in every bag of food that is given, in every meal that is provided, God is loved and worshipped.

May we too walk in the path that is before us, exercising the merciful love that has come to us through Christ Jesus our Lord; giving thanks and praise to God along the way. Amen.

Ashlee Wiest-Laird is a pastor in Jamacia Plain, Massachusetts. She originally preached this sermon on the day that her church’s youth group participated in Boston’s annual Walk for Hunger. This sermon was printed in Sacred Seasons, Pentecost/Ordinary Time 1999.