It all began with an earthquake in Honduras. In 1974, George Sheridan, a member at Oakhurst Baptist Church in Decatur, GA, traveled to that country with a group from the Foreign Mission Board of the Southern Baptist Convention to help with disaster-relief efforts. Later he wrote that the experience awakened him to the stark realities of hunger around the world.

George returned to Oakhurst, which was, at that time, a Southern Baptist church, with the hope of doing something about hunger. He preached a sermon about world hunger that galvanized the congregation. One member issued a challenge in the church newsletter: “To be brought face-to-face with the reality of hunger issues and fail to respond would be inexcusable.”

The church responded by embracing hunger relief as a major missions effort, with Gary Gunderson and Andy Loving following George’s lead. In January of 1977, they sent out a mimeographed one-page newsletter to 600 Southern Baptists, and the Seeds ministry was born.

“To be brought face-to-face with the reality of hunger issues and fail to respond would be inexcusable.”  –Oakhurst Baptist Church member

The Seeds mission group, which soon included Tom Peterson and Ken Sehested, continued to push Southern Baptists to respond to hunger issues. In 1978, they helped organize a convention-wide Convocation on World Hunger at the Ridgecrest Baptist Assembly site in North Carolina. That same year, Seeds encouraged the creation of the first Southern Baptist World Hunger Day.

The next year, the group produced the first issue of Seeds in magazine format, with the tagline “Southern Baptists Concerned about Hunger,” and a book of 30 “miss-a-meal” meditations, entitled Roots of Hope. The magazine began a bimonthly format, alternating with the newsletter supplement Sprouts. In the next few years, the Seeds staff assisted in starting soup kitchens, night shelters, food pantries and other poverty-related assistance programs across the United States. 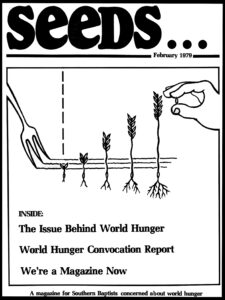 By 1982, the ministry had expanded to include other Christian groups, and the tagline on the banner changed to “Christians Concerned about Hunger.” That year, the Seeds Reader issue on Women and Hunger won the prestigious Hunger Media Award given by World Hunger Year. The next year, Seeds co-published, along with the Alternatives group, the curriculum All Tied Up, a weekend hunger-education retreat for youth.

Andy Loving left in 1984 to work for St. Luke Episcopal Church’s ministry for homeless people. Ken Sehested left at the same time to become the founding director for the new Baptist Peace Fellowship of North America. Gary Gunderson became the Seeds director and Tom Peterson took on the editor’s job. Also that year, Seeds organized a strong effort to respond to the famine in Ethiopia and published A Guide to World Hunger Organizations, edited by Louis Knowles.

The next year, Seeds won another Hunger Media Award for “The Church and Hunger,” a second Seeds Reader, and helped the city of Decatur form a sister-city relationship with two cities in Burkina Faso, West Africa.

Seeds representatives led a study tour to the Philippines in 1986, during the revolutionary “People Power” election of Corazon Aquino as president. During that year, the Seeds group also visited 22 US cities and towns to examine the “State of the Hunger Movement,” and published a special issue with the Food First organization on Hunger and Democracy.

A special 10th anniversary issue with UNICEF on Child Survival took the staff to West Africa, Brazil and Indonesia in 1987. That same year, Seeds published the Hunger Action Handbook, by Leslie Withers and Tom Peterson, with 24 “how-to” chapters.

However, in the next couple of years, the sense of call and purpose began to wane. By that time, the founding editors were gone and people were tired. The Oakhurst folks thought maybe it was time for the ministry to be laid to rest. But there was a group of people in Texas who didn’t want Seeds to die.

So, in 1991, Seeds of Hope, Inc. was formed in Texas, and the ministry moved to Waco’s Seventh & James Baptist Church, with Katie Cook, then on staff at Caritas of Waco, as editor. In July of that year, Oakhurst hosted what amounted to an adoption ceremony, with the founding editors and the Oakhurst congregation giving their blessing to the new incarnation.

Sandy Dwyer, who provided the lions’ share of the transition work, and former editor Tom Peterson, presented Katie with a framed copy of the original newsletter, the first issue of Seeds Magazine and “Seeds…a New Generation,” the Waco group’s introductory brochure. The accompanying inscription read:

Fourteen years, three months and 13 days ago, this newsletter began as a mission of hope out of Oakhurst Baptist Church. Today, we pass on that mission to a new group of people who “have a sense of call.” Katie Cook comes to us representing a new generation of Seeds, ready and able to carry on….

The Seeds of Hope mission statement declared that this group “intended to act on our belief that the Bible’s mandates to feed the poor are not optional, and that we are responding to those commands with joy, out of a sense of gratitude for the abundance in our own lives.” 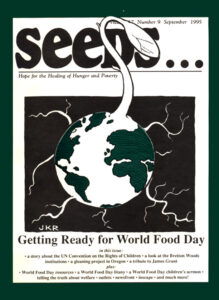 On September 4, the Waco office was officially open for business in a former Sunday school classroom at Seventh & James. That first year, the new group published Roots of Hope, Volume II, a book of 40 meditations from an ecumenical, interfaith pool of writers.

The first issue of Sprouts from Texas came out in January 1992, as the ministry began a quarterly publication of Seeds Magazine, with two issues of Sprouts in between.

In 1994, Michael Williamson compiled A Guide to World Hunger Organizations, Volume II, a 10th-anniversary update. The next year a group of Central Texas volunteers organized a benefit concert, “Seeds for the World,” featuring the News Boys, Sixpence None the Richer and five other gospel acts.

In 1996, Katie represented Seeds in a human rights delegation to Chiapas, the southernmost state of Mexico, sponsored by the Baptist Peace Fellowship of North America. Also that year, the Smyth & Helwys publishing house hosted the first fledgling Seeds website. The Seeds staff developed the site with a grant from the Cooperative Baptist Fellowship.

In 1998, the Council and staff, in the face of the changing landscape of journalism, began to face the fact that there wasn’t enough money to keep printing a magazine. But the history of Seeds, as Marla Pierson wrote in a Waco Tribune-Herald article, is a tale of resurrection.

But the history of Seeds, as Marla Pierson wrote in a Waco Tribune-Herald article, is a tale of resurrection.

Within the year, church leaders said that they missed the worship resources published in Seeds, and that they were looking for such materials to help them lead their congregations, gently and consistently, into awareness of economic justice and food-security issues. So the staff began to create Sacred Seasons, a series of resource packets (for Advent, Lent and a fall Hunger Emphasis) with a biblical focus on justice issues, particularly hunger and poverty.

Also during that year, the Seeds team received a phone call from hunger educators who represented different faith communities in the US. These leaders, part of an ad hoc group called Interfaith Hunger Educators, said they missed the information and inspiration they had received from Seeds.

That conversation began negotiations for a partnership that would produce the award-winning Hunger News & Hope, now a mostly electronic newsletter that is distributed through several religious denominations and through the Seeds website and social media.

In 2000, Seeds published, through Sacred Seasons, a series of monologues about the events of Holy Week for a scene-to-scene dramatic presentation to children. Over the years, writers added to the monologues, and now the popular Easter Walk packet includes 12 monologues that are used in presentations for all ages. In 2008, Seeds published a companion packet: With Our Own Eyes, a group of scene-to-scene monologues about the seven resurrection appearances in the gospels.

From 2003 to 2005, Seeds created and posted worship kits for three peace services, sponsored by the American Baptist Church. In 2006, the staff created Developing a Heart for the Hungry: A Hunger Emphasis Primer for Churches. Seeds received a grant from the H. C. Gemmer Christian Family Foundation in 2015 to update the primer, and the Waco Regional Baptist Association (WRBA) printed a number of them for its churches. 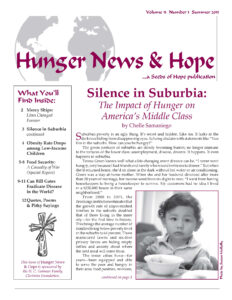 Over the years, the Waco staff developed a curriculum for a four-part workshop for churches called Hunger in God’s World. In 2015, that curriculum was published in collaboration with the Hunger Ministry division of the WRBA.

The Seeds folks in Waco, like their predecessors in Decatur, have not been content with publishing only, but have been active in organizing and training people to respond with compassion and integrity to difficult and compelling issues in our world. In addition to the national Interfaith Hunger Educators group, Seeds works closely with a number of local groups: Caritas of Waco, World Hunger Relief, the McLennan County Hunger Coalition, the Heart of Texas CROP Hunger Walk and others.

Back in 2003, Seeds staff and Megan Sims, then the children’s minister for Seventh & James Baptist Church, led a day camp in which they taught a group of children how to report on local agencies that helped to get food to people in need.  The end product of that camp was the newsletter Hungry for Hope. 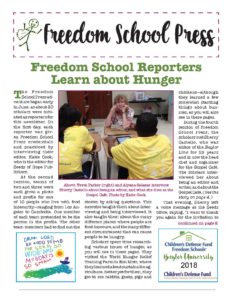 When Malkhaz Songulashvili, a Baptist bishop in the republic of Georgia, heard about the Freedom School projects, he invited Seeds folks to Tbilisi in 2019 to conduct a similar workshop. Katie worked with an interfaith group of high school and college students to produce a journal about hunger in Georgia.  She was accompanied by Seeds Council members Michael Long and Guilherme Almeida. Guilherme conducted a Theatre of the Oppressed workshop with the same students.  (Click here for more information about this project.)

The Waco Seeds council and staff have been engaged several times in intense discernment about the future of the ministry. During the most recent one, someone came across a meditation on the call of the prophet Isaiah, written by Frederick Buechner. In the meditation, Isaiah asks God, “How long should I do this?” The answer, in Buechner’s paraphrase, is “Do it ’til the cows come home.”

In the meditation, Isaiah asks God, “How long should I do this?” The answer, in Buechner’s paraphrase, is “Do it ’til the cows come home.”

The Council and staff saw this as a sign from God, and that is why, 30 years after the “adoption,” Seeds is still here.

Forty-two years ago, as Oakhurst historian Alverta Wright wrote, “the winds of a hurricane planted a seed in the heart of a Christian relief worker.” That seed sprouted and has been nurtured by hundreds of people. We hope it will flourish until the cows come home.