A Challenge for the Feast of St. Valentine 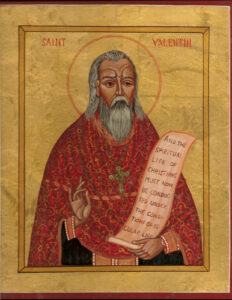 Most historical sources show that the modern celebration of St. Valentine’s Day, the giving and receiving of gifts from a romantic partner, has no connection whatsoever with any saints named Valentine. There is a legend that says St. Valentine was a priest who was a prisoner in Rome awaiting his death, and that a young girl wrote him letters to console him.

I can’t find the origin of this legend, further back than a 35-year-old book from Alternatives for Simple Living (an organization that began at Oakhurst Baptist Church in Decatur, GA, and was once very closely associated with Seeds). Alternatives, over these past 35 years or more, has suggested that people commemorate St. Valentine’s Day by writing letters to inmates.

Roman Catholic tradition says St. Valentine was beheaded for his faith. There is evidence of two men named Valentine who were martyred in Rome by the Emperor Claudius during his rampage against Christians in 269 CE. One was a Christian priest and the other was a bishop. Both were killed in the same street, evidently in the same year. The Westminster Dictionary of Church History says that the stories of the two men may have merged to produce the martyr legend that came out of the middle ages. The Oxford Dictionary of the Christian Church says that perhaps two stories came out of the existence of one man.

To further confuse matters, the Catholic Encyclopedia also mentions a St. Valentine from the same era who was martyred in Africa, but that is all we know about him.

Peter Travis, a professor of Anglo-Saxon and English at Dartmouth College, says that Geoffrey Chaucer may be responsible, in his poem The Parliament of Fowls, for the attachment of St. Valentine to a courtly love.

Possibly the first record of a large celebration of the Valentine’s feast day comes from a letter written in 1477, but both the Oxford Dictionary of the Christian Church and the Westminster Dictionary of Church History say there seems to be no connection between that celebration and any of the Roman martyrs.

Some more recent legends suggest that Valentine got into trouble for performing marriages involving Roman soldiers. However, given the emperor’s raging enmity for all Christians, a specific crime other than being a Christian leader wouldn’t have been necessary.

Some later stories involve Valentine falling in love with the young girl who wrote to him while he was in prison. (This would not have been as scandalous as you’re thinking, because celibacy in priests was not universally practiced in the Roman Catholic tradition until the medieval era.) However, others say that she simply befriended him and wrote encouraging letters to him. He supposedly wrote her back and signed the letter, “Your Valentine.” In Latin, of course.

I have often suggested that people commemorate this day by thinking about different kinds of love—not just romantic love—and writing letters of affirmation or appreciation for friends. After all, Jesus talked about the greatest kind of love being for one’s friends.